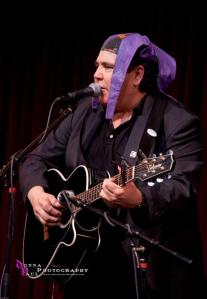 Steve Minotti sits down with Left on Red In The Greenroom
Check out my new show “In The Greenroom” for A.V.A Live Radio. This month I interviewed the most interesting band “Left On Red”, a Folk Rock and Americana duo from New York City. Known in the subway’s and city streets as “buskers” this duo got there start playing on the stage of the streets in NYC. They were recruited by Chrystal Hartigan to perform at her songwriters showcase at the “Broward Center Of The Performing Arts” on October 8,2012. The Baron Sisters, Alexander Star and Elsten Torres also took the stage along with Left On Red for an electrifying night of music from these extremely talented songwriters. I got a chance to sit down with Liah Alonso and Kelly Halloran from Left On Red before there show and here’s what they had to say!!!
www.leftonredmusic.com
www.facebook.com/leftonredtheband